MINDS and Nedbank enter into a Youth Scholarship Programme Partnership 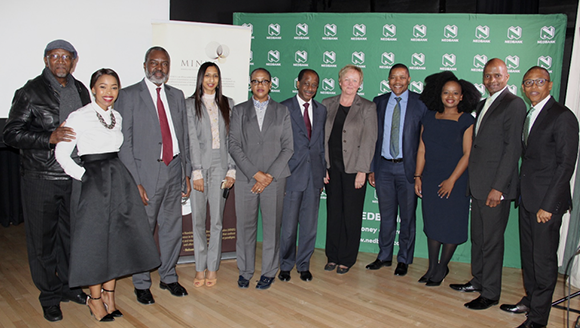 Nedbank’s Eyethu Community Trust announced its support of the MINDS Scholarship Programme at a ceremony held at the Nedbank Group headquarters in Johannesburg, South Africa. MINDS launched this unique scholarship programme for African students to study within the continent, but outside their home country. The programme aims to develop Pan-African leaders with a lived understanding and experience of the continent, who can in turn facilitate for economic integration and social cohesion. MINDS holds the view that greater integration and cohesion on the continent are essential conditions for the Africa’s development.

Speaking at the event, Nedbank’s Chief Executive Officer, Mike Brown said that Nedbank was excited to lend support to such an initiative that shapes leaders. Brown stated that ethical and inspirational leadership is an important element in engendering confidence, investment, growth and ultimately higher employment rates. Echoing Brown’s sentiments, Dr. Terence Sibiya, Managing Executive Nedbank Corporate and Investment Banking described the partnership as a “meeting of minds”, highlighting the alignment of MINDS’ activities with Nedbank’s vision to expand on the continent.

A robust discussion on the importance of investing in leadership development on the continent followed the signing of the agreement. The panel constituted by Dr. Nkosana Moyo, MINDS’ Founder and Executive Chair, Francis Daniels the Director of Africa Opportunity Partners and a MINDS Advisory Board Member, Zamafuze Ngcobo a Mandela Rhodes Scholar and Leadership Development Consultant and Victor Kgomoeswana the author of ‘Africa is Open for Business’, explored the continent’s leadership crisis, the role of young Africans in providing redress and the importance of investing in leadership development initiatives.

Dr. Nkosana Moyo urged all Africans to take responsibility for creating the future they envision, inviting interested parties across the continent to partner with MINDS on this unique initiative. In the concluding remarks, Thulani Sibeko, Nedbank Group Executive: Group Marketing, Communications and Corporate Affairs affirmed the relevance of the MINDS Scholarship Programme on the continent and thanked all stakeholders. Also attending the ceremony were the Royal Norwegian Ambassador H. E. Trine Skymoen, trustees of the Nedbank Eyethu Community Trust, Nedbank and MINDS staff and the community at large.